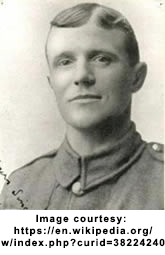 On Thursday 12 July 1917, a huge crowd gathered at Shield Row station to meet the 6.13pm train from Newcastle upon Tyne to greet Private Michael Wilson Heaviside (20 October 1880 – 26 April 1939). Private Heaviside was a recipient of the Victoria Cross, the highest and most prestigious award for gallantry in the face of the enemy that can be awarded to British and Commonwealth forces.

Details of how Private Heaviside came to be awarded the Victoria Cross can be found in Wikipedia.

He was met at the station by members of his family, a reception committee, huge crowds and a cinematographer (Film of the arrival in Stanley of Private Michael Heaviside VC: Imperial War Museum Film) 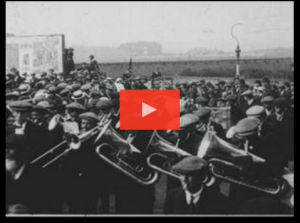 In a procession headed by the Craghead Lodge banner, South Moor Colliery Band, local Volunteers and the Church Lads’ Brigade, Heaviside was driven in a Rolls Royce motor car to the Stanley Urban District Council office in Front Street, where he took his place on the balcony above the entrance and was welcomed by the Chairman of the Council.

The procession then proceeded to South Moor and through Bloemfontein, arriving in Craghead at 7.45pm.

On 12 July 2017 the homecoming of Michael Heaviside was celebrated by local residents. A parade on Stanley Front Street took place and a commemorative stone and plaque were unveiled near Heaviside’s home at Bloemfontein.