You are here: Home / Thomas Sheavills

The involvement, during WW1, of my Grandfather Thomas Sheavills 1886 – 1958.
By Brian Denton

Thomas Sheavills was born in the village of Cornsay in County Durham in 1886. He married Margaret Rowling and became a coalminer and probably began work at Cornsay Colliery initially but transferred to the Morrison North pit in Annfield Plain some time later. They lived in a colliery House in Polar Street in the village of South Moor, Stanley, Co Durham where they had, I believe, eight children; my mother being one of them.
Although his profession was a reserved occupation, he volunteered for service at the outbreak of war. He became a member of the 23rd Battalion of the Royal Northumberland Fusiliers, one of four battalions; 21st – 24th designated The Tyneside Scottish. He trained at Alnwick in the Pastures adjacent to Alnwick Castle set aside by the Duke of Northumberland as a training area. 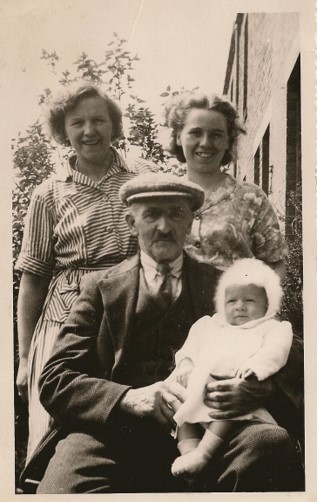 He was wounded in the left leg at the battle of the Somme, a river in Picardy, northern France, and sent to a Canadian Field Hospital. On returning to fitness, he was transferred to the 3rd Battalion of the RNF and survived the war; he was awarded a pension of thirteen shillings and six pence (approx £1.53p) per week for life.

His wife Margaret had apparently fallen ill some time prior to his return home to find his sister-in-law, Ethel Rowling, caring for the children. When Margaret died some time later, grandfather married Ethel and went on sire another eight children one of whom, Elizabeth, died at the age of eight years.
Some of the elder male children by Margaret emigrated to Australia prior to the remainder of the a disease-ridden area called the Gill Bottoms in the village of Rowlands Gill near Newcastle. Seeing the dire conditions in which we were living and being a concerned family man, Granddad took us to live with him until 1947 when our father finally came home after serving two years as a commando 1945 – 47 with the 4th Reconnaissance Corps, the Royal Scots Greys.
Granddad Sheavills was a wonderful grandparent, who cut our hair, cobbled our shoes, gave us pocket money and will never be forgotten.
Thomas Sheavills died at the age of 72 years, as a result of Jacksonian Epilepsy and arteriosclerosis, at Lanchester Mental Hospital, Co Durham in 1958 while I was serving with the RAMC.

Bearing the Standard by Brian Denton